We were fascinated by the possibility of generating new and non-existent but realistic images using conditional adversarial neural networks that remembers a certain set of features from what it has seen in the past; the same process that we humans undergo when we dream.

Taking inspiration from the given examples, we applied a pre-defined color scheme to geographic data (OpenStreetMap) using Mapbox Studio: roads, green spaces, buildings, water were styled with different colours (black, green, red, blue), so that the neural network (NN) could compare these to aerial images and learn the correspondence between them. 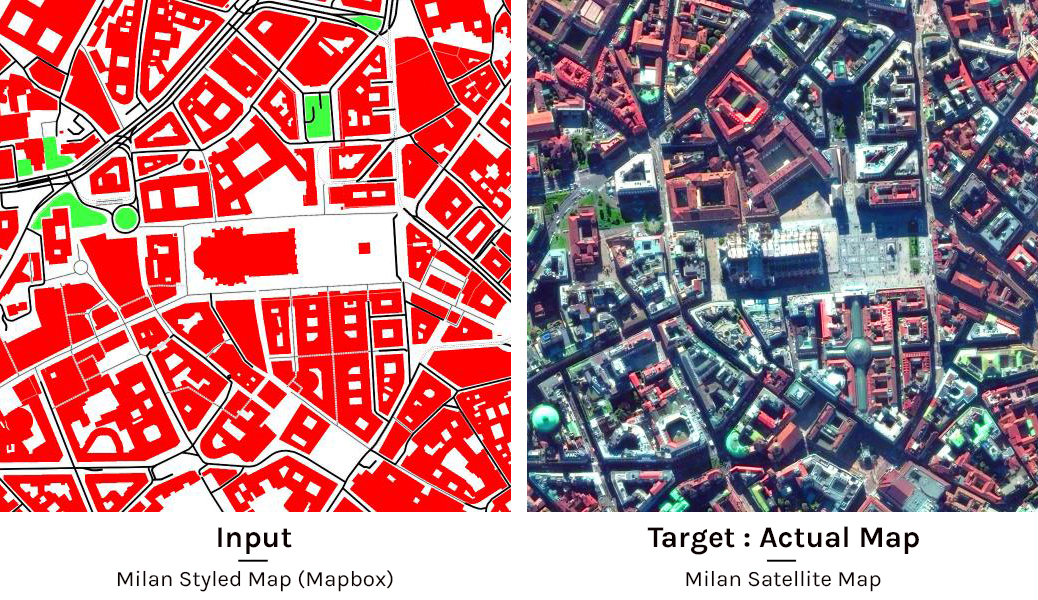 We then used vvvv as a tool to collect both satellite imagery and the associated labeled map tiles. We trained a conditional generative adversarial network, using pix2pix to reconstruct the satellite imagery from its map tiles. The sample below on the right shows the reconstructed sattelite image of the given map tile, closely resembling to the original on the left.

Using this process, we trained generative models on map tiles from several cities around the world, and generated samples from them, each differentiated by the unique characteristics of each city; the same blue shade will translate to a venetian canal or a simple river, red will became a 17th century villa or a 50s modernist house in the hills of L.A.

To encompass the variability of all geographic features, we left the background as plain white. This translated to unexpected results as the NN could interpret the same white patch of land as an airport, a maize field, a dumpster, or many other unexpected objects. Curiously, the model of Venice learned to hallucinate fake boats in the canals, where none had been present in the original images!

An online drawing interface was developed during a workshop the following week in Seoul, South Korea. It was built with node and p5.js, allowing a viewer to interactively draw a map of roads, buildings, water, and parks and have it rendered live into the style of Seoul. The below video shows it in action. Source code available here.